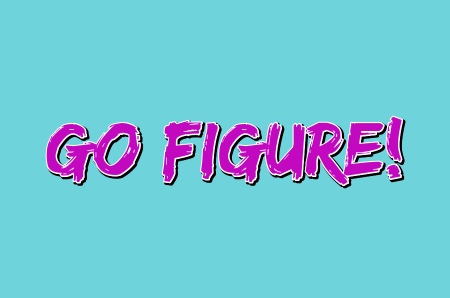 GO FIGURE is something you might want to say when you’re puzzled, perplexed or surprised. You say it when you think the situation you describe is strange astonishing or stupid. You also suggest (rhetorically) that the audience should seek to find sense in the situation (and probably won’t find it). Just try to figure that one out.
“Go figure, the answer was right under my nose the entire time!”
“The car wouldn’t start yesterday no matter what I did, but today it works just fine. Go figure.”
The verbal equivalent of a shrug, used informally in NAmE, the brief phrase expresses a wealth of feeling.
“After losing their first six games, they won the next ten. Go figure.”
It can be used to:
1. indicate the unexpectedness or absurdity of something. How can you explain that? Isn’t that just crazy? Could anyone in the world have been expected to make allowances for such an improbability?!
“Crossing the road at the traffic lights, clocked a guy coming in the opposite direction with a window pane. Couple of hours later, on my way back, at the same traffic lights, saw the same guy with the same pane coming back again. Go figure.”
2. highlight that something is comical or ridiculous. Isn’t that funny!
“The one time I get to the station on time, the train is delayed—go figure!”
3. express the belief that something is amazing or incredible. Wouldn’t you know?
“There’ll even (go figure!) be an Elvis impersonator!”
4. suggest that the conclusion to be drawn about something is obvious so you do not want to give any explanation. Work it out for yourself! Duh!
“She says she wants to have a conversation, but when I try, she does all the talking. Go figure.”
5. confess one’s ignorance. How could I have anticipated something as crazy as that?!
“Go figure her brother was a prize-fighter!”
People often say go figure when they want you to consider something they have just said because it is surprising, interesting or contradictory.
“The average wage is $23,000 but you would need to earn $31,000 to buy the typical first home. Go figure.”
Loaded with sarcasm, disgust and/or exasperation it can also express some Murphy’s Law sort of dissatisfaction or you-can’t-beat-The City Hall kind of accepted defeat.
“My boss makes me do an awful lot of paperwork. Guess what? He never even checks it! Go figure.”
When you are talking to someone and they don’t understand or don’t know what you’re talking about you are just entitled to tell them to go figure.
A: “You should check the Beatles, dude. They’re so awesome.”
B: “The who?”
A: “Go figure.”
It can also be used as a response to show that you do not understand a particular situation or the way a person is acting.
Bearded John: “I am actually a woman.” Fred: “Go figure!”
Some sources state that the terms comes directly from the literal, math meaning of the verb “figure” as “calculate”. According to The Oxford Dictionary of Idioms its usage is quite recent and its origin appears to be just a colloquialism derived from “go try to figure it out” in the late 1960s.
“But who knows. Go figure people.” (shrugs their shoulders)
Related Articles
July 28, 2019
0 1,022 2 minutes read
Share
Facebook Twitter LinkedIn Pinterest Reddit VKontakte Messenger Messenger WhatsApp Telegram Print
Share
Facebook Twitter LinkedIn Pinterest VKontakte Messenger Messenger WhatsApp Telegram Share via Email Print