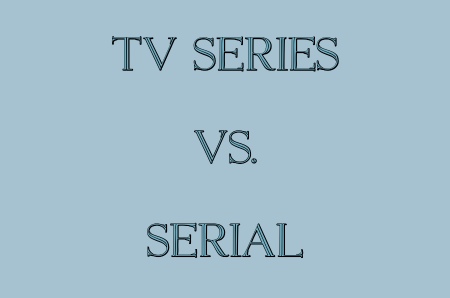 What is the difference between a TV series and a serial? Is one merely a subset of the other? Perhaps the difference is largely semantic. Or maybe the lines have blurred a bit.
“It is more than a regular drama serial or just a sitcom.”
“The drama series is produced by BBC Wales and will be transmitted next year.”
The terms are closely related; a serial list of items forms a series. However they are essentially only loosely related terms when applied to television.
“Lisa Kudrow became famous for her role as Phoebe in the TV series Friends.”
TV SERIES is a TV show broken into episodes. Each episode is usually broadcast at a regular interval or released simultaneously on streaming services.
“Are you watching the television series on Britain’s castles?”
Each episode is usually self-contained, so you can start from any episode.
“Just watched that random episode of Friends and got totally hooked up.”
A series often contains the same characters throughout, but each episode is a different story. Martial Law, NYPD Blue, Colombo and Friends are all examples of series.
“Series is the more common term as the majority of TV content is broken into groups like this, with exceptions like soap-operas, news and current affairs.”
In the US, if it’s on every week (or at regular intervals) and is composed of episodes, it’s a series. The content or style or plot of the episodes makes no difference. They are all TV series.
“In the US each group of episodes is called a season, in the UK each group is what is called a series.”
A SERIAL refers to a story line that connects and weaves through its episodes.
There is some risk of becoming confused, or at least not realizing the importance of a certain turn of events, if you watch its episodes out of order.
“Watching two episodes of Breaking Bad in the wrong order or skipping episodes would very much damage the experience.”
It isn’t a particularly common label, esp. in AmE, whereas (TV) series is a much more common and broader term. In the UK, in a serial the story is ongoing: the same plot carries on from week to week. In a series the story is different each week.
“In a serial each episode picks up the story from where the last one stopped, so if you’ve missed the first 2 episodes then you wont know what’s going on.”
From that point of view, Game Of Thrones, Dallas, Homeland, etc. are all serials, though you won’t often find them labeled like that.
“If you want to watch a serial, you should start from the first episode, because each episode is a continuation of previous one.”
Overall, a (TV) series or TV show are the usual terms which means the term ‘serial’ is becoming uncommon and old-fashioned.
“These days, as few as three episodes of any drama, is called a series.”
A TV show can be a series but not serial. It can also include non-fictional content like a gardening or wildlife documentary show.
“She has made a series of documentaries on the subject of family relationships.”
The programs that we see on the National Geographic or the Discovery Channel can be thought of being as part of a series.
“A new series of wildlife programmes has started on Monday evenings.”
In BrE, the term serial is synonymous with the American term miniseries – a short-run series with one title and plot. The finale of the serial sometimes concludes the program as a whole, for sequel serials are rarely made.
“A serial in AmE refers to the shorts that they used to show before movies a long time ago that continued each week – Flash Gordon, etc. No one has made a serial in a long time.”
In BrE a TV show can be both series and serial, like a long running soap opera that runs for years with no gaps and where the story is continuously developing.
“The series of Doctor Who is the programme made up of a continuing series of different serials.”
Related Articles
July 28, 2019
0 1,017 3 minutes read
Share
Facebook Twitter LinkedIn Pinterest Reddit VKontakte Messenger Messenger WhatsApp Telegram Print
Share
Facebook Twitter LinkedIn Pinterest VKontakte Messenger Messenger WhatsApp Telegram Share via Email Print

📞 CALL vs CALL TO