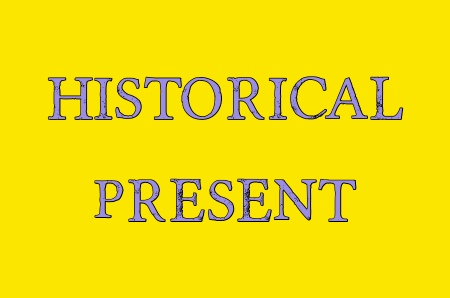 In linguistics and rhetoric, the historical present or historic present, is the employment of the present tense when narrating past events to make them sound as if they are happening now.
“It is a bright summer day in 1947. My father is trying to decide which of his eight children he will take with him to the county fair.”
It is often used when a speaker or writer tries to parachute you into the midst of an unfolding story.
“I’m nine years old, in bed, in the dark. The detail in the room is perfectly clear. I am lying on my back. I have a greeny-gold quilted eiderdown covering me.”
It is commonly used for historical events as facts are listed as a summary and the present tense provides a sense of urgency.
“1945: the war in Europe comes to an end.”
University professors or a TV show panelists might find themselves using the HP to keep listeners from peeling off.
“What Socrates is trying to do here is …” or “Montezuma uses human sacrifice as a means of …” or “Alexander invades India in 326 BC and…”
Likewise, it is used in headlines where it replaces the present perfect to make the events seem even more dramatic.
WAR CRIMINAL ESCAPES FROM COURTROOM!
It is also used in news bulletins. The announcer may say:
“Fire hits a city center building, the government defends the new minister, and in football City, United lose.”
In informal conversation, we often tell stories and jokes in the HP to make them sound more casual, more immediate, more exciting and less formal.
“A horse walks into a bar. The bartender asks, ‘Hey, why the long face?'”.
We also use the HP when we report what people say as part of a story.
“It was only eleven o’clock and my mum says, ‘You’re late again.’ And I say, ‘No, I’m not.’ Then my dad starts to shout.”
In conversation, it is particularly common with verbs of communication such as say, tell, write, etc. and in colloquial uses, go’ and (be) like, esp. in AmE.
“I’m like are you from LA? and she’s like yeah, how did you know?”
“I asked why he didn’t call me back, and he goes, “I called you back!”
The third person form ‘says’ is also used in nonstandard narration with I.
“So I says to the guy, I…”
In such narratives, we use the present simple for main events and the present continuous for background events.
“So I walk into this shop, and I see this man with a gun in his hand. And like… everybody’s looking at him. Then he says…”
Summaries of the plots of works of fiction are conventionally presented using the present tense rather than the past tense.
“At the end of the story, Luke becomes a Jedi and defeats Darth Vader.”
“Historic present” is the form recognized by the OED, whereas “historical present” is the form in Merriam-Webster.
“If you introduce things which are past as present and now taking place, you will make your story no longer a narration but an actuality.”
Though the you-are-there illusion forced by the HP can be an effective narrative device, it can also feel manipulative. Recently a Canadian columnist complained about a CBC Radio news program overusing the HP, as in ‘UN forces open fire on protesters.’ The director told him that the show is supposed to sound ‘less analytic, less reflective’ and ‘more dynamic, more hot’ than the flagship nightly news show.
“Switching from past to historical present can add interesting texture, but repetitive usage becomes confusing.”
Some commentators find the use of the HP “irritating” and “pretentious”, arguing that it lends “an entirely bogus sense of immediacy to whatever is being described”.
“Severe overuse will sound annoying.”
Other users feel that it’s a perfectly natural way of thinking about the past. After all, when we remember something, we experience it as though we’re spooling it back in our heads, in real time. It’s a re-run of the present. We dive into the recollection, and live it out again.
“Think of hypnosis: a subject in a trance will use the present tense, even if he or she is describing a past life.”
Some usage guides recommend to avoid the use of the HP unless the narrative is sufficiently vivid to make the use spontaneous. The HP is one of the boldest of figures and, as is the case with all figures, its overuse makes a style cheap and ridiculous.
Related Articles
July 28, 2019
0 1,025 3 minutes read
Share
Facebook Twitter LinkedIn Pinterest Reddit VKontakte Messenger Messenger WhatsApp Telegram Print
Share
Facebook Twitter LinkedIn Pinterest VKontakte Messenger Messenger WhatsApp Telegram Share via Email Print

What is the difference between a TV series and a serial?