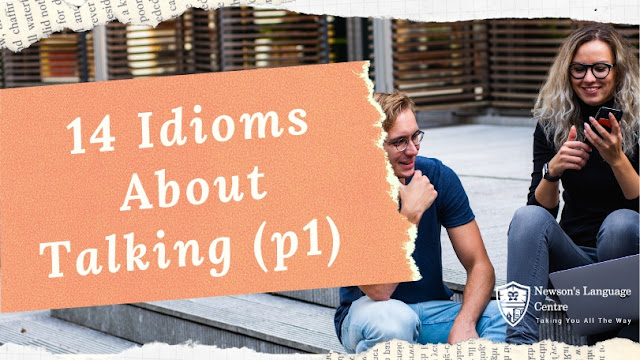 ✔ a little bird(y) told me – told by a secret informant.
– Wow! How did you find out I’d be here?
– A little bird told me you were coming.
✔ an armchair critic – one who speaks critically on topics one actually knows little to nothing about.
– My uncle is such an armchair critic about the classes I’m taking—the fact that he never went to college doesn’t stop him from weighing in!
✔ like talking to a brick wall – being ignored.
– Talking to you when the TV is on is like talking to a brick wall. Hello, can you hear me?
✔ “spit it out!” – a saying used to urge someone to get to the point/confess something quickly.
– Just spit it out already—do you want to go to the dance with me or not?
✔ the gift of gab – the gift of being able to speak with eloquence.
– Alexis really has the gift of gab, so she should be the one to address the potential investors.
✔ to be all mouth – to talk boastfully about something in order to try and impress someone without intending on acting on your words.
– He talks a big game, but when it actually comes to asking out a woman, he’s all mouth.
✔ to beat around the bush – to avoid addressing the most important matter.
– Don’t beat around the bush—just tell me the truth. What’s happened?
✔ to cut to the chase – to directly address the most important matter.
– Come on, cut to the chase already—what exactly are you trying to ask me?
✔ to chew the fat/rag – to chat/catch up in an unhurried manner.
– My sister and I haven’t seen each other in nearly five years, so we stayed up half the night chewing the rag.
✔ to dish it out – to be critical.
– You were all over your sister about her eating habits, but you start pouting when I point out that you had a cupcake for dinner last night! Pfff, you can only dish it out!
✔ to run off at the mouth – to talk a lot and in an indiscreet manner.
– We would have gotten away with our plan if your dumb cousin hadn’t started running off at the mouth all over town.
✔ to shoot the breeze – to chat in an unhurried manner.
– We spent the entire afternoon just shooting the breeze. It was great!
✔ to speak out of turn – to say something inappropriate/tactless.
– Excuse me if I’m speaking out of turn, but what you are proposing is quite wrong. Bob didn’t mean anything negative.
✔ to speak the same language – to understand someone based on sharing their opinions and values.
– Bill and my dad are getting along very well together. They’re both obsessed with hockey, so they speak the same language.
Related Articles
July 28, 2019
0 1,027 2 minutes read
Share
Facebook Twitter LinkedIn Pinterest Reddit VKontakte Messenger Messenger WhatsApp Telegram Print
Share
Facebook Twitter LinkedIn Pinterest VKontakte Messenger Messenger WhatsApp Telegram Share via Email Print

Strategy for Use of English