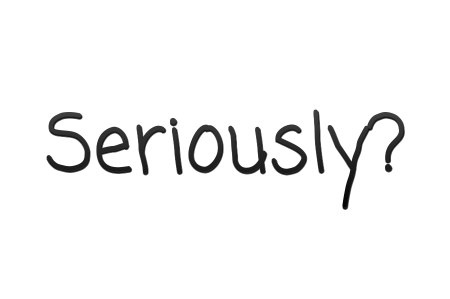 SERIOUSLY can express surprise and/or incredulity at a statement. The modern form of “Are you being serious?”, it is often used with a sarcastic almost-a-question-but-more-of-a-statement tone.
“Seriously? That’s it? All that you can say now?”
“I mean, seriously? You expect me to believe it? Seriously?! Seriously?!”
It is also used as an emphasis for a thought, intent or future action.
“Seriously guys, I want to be part of the elite media.”
“Seriously” doesn’t really mean you are serious here. In fact, it has nothing to do with absorption in thought, pressing concerns, or something significant. In the context of everyday conversation it’s just another word that is used for more emphasis than most things deserve.
“Dude, seriously, I got an A on that Chemistry test.”
And, when combined with other language fillers (such as ‘bro’, ‘dude’ or ‘like’), any actual seriousness this word used to offer is completely thrown out the window.
“Like seriously guys, I dig Renaissance and all.”
“Seriously, dude, that Faulkner guy kicks tons of ass.”
Sometimes, it is a lazy response of agreement to almost any statement; an alternate term for “yeah”, “same”, “mmm”, etc.
A: “This lecture totally blows.” B: “Serously.”
Many users find it jarring and overused by the average conversationalist, as it verges on overkill as teenager or hipster jargon. That said, it is a widely understood modern colloquial form, written in dictionaries and used by most everyone now.
“Seriously though, get yourself a job, you bum!”
It is very informal though, and might be out of place in an interview or at a formal occasion.
“It has traditionally been believed that the Sun emits neutrinos. Seriously, guys? Our team conducted a series of experiments …” (No, not likely.)
Additionally, other than in verbatim transcription, it isn’t something you might want to use in writing or expect to see written, except perhaps in a magazine opinion column, Internet forum, text message, etc.
“Senator Jones accused Senator Brown of being a racist. Seriously? Senator Jones?” (Perfectly legit)
Informally, seriously also means ‘very’ or ‘truly’, like when you are seriously hungry or when the dessert that you ordered is seriously good.
“Aw, that was seriously badass.”
Related Articles
July 28, 2019
0 1,020 1 minute read
Share
Facebook Twitter LinkedIn Pinterest Reddit VKontakte Messenger Messenger WhatsApp Telegram Print
Share
Facebook Twitter LinkedIn Pinterest VKontakte Messenger Messenger WhatsApp Telegram Share via Email Print

THE PERFECT INFINITIVE with TO (to have + past participle)

GET/HAVE THE BETTER or THE BEST OF someone or something