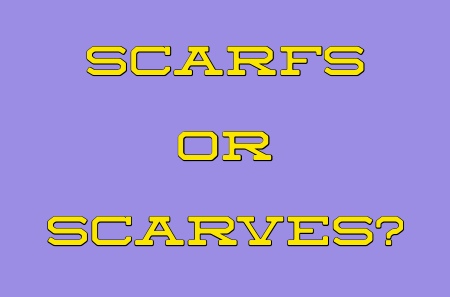 A SCARF is a length of fabric you wrap around your neck or drape across the shoulders of your coat in cold weather. If you choose to wear more than one, are they scarfs or scarves?
“A standout was the brightly colored cotton scarves with whimsical patterns such as different varieties of bugs.”
SCARFS and SCARVES are both correct spellings of “scarf”.
“The shoppers piled carts with coats, scarves/scarfs and sweaters.”
SCARFS [skɑː(r)fs] is the older of the two forms, though it has fallen from prominence since the 20th century.
“The women walked down the street with scarfs on their heads.”
SCARFS can also be the third person singular form of the verb “scarf”. It is typically used in the phrasal verb “scarf down”, which means to eat quickly and voraciously or stuff food into one’s face.
“Heather scarfs down her goulash too fast to enjoy it.”
It’s probably a newly formed American variant of a little-used British sense of scoff.
“I baked a huge cake this morning, and the kids scoffed the lot.”
SCARVES [skɑː(r)vz] is a form that started to predominate in the 20th century. Even though scarfs is the original variant, scarves is more than eight times as common in modern print sources, according to Garner’s MAU.
“As the winter wind blew through the streets, people wrapped scarves around their necks to keep warm.”
The switch probably happened by analogy with other words ending in f. Wife, half, and leaf, for instance, are inflected wives, halves, and leaves, and likening scarf to these words is only natural.
“Sweaty by the time I reached the top, I had to unknot my scarves and unzip my parka.”
Scarves is never a verb. If you’re searching for a verb, then scarfs is the word you should choose.
“It scarfs down electricity like a football team at a hot dog eating contest.”
All in all, at this point in time, “scarves” is the preferred term as it’s more widely used, and will likely seem more natural in speech and writing.
Related Articles
July 28, 2019
0 1,030 1 minute read
Share
Facebook Twitter LinkedIn Pinterest Reddit VKontakte Messenger Messenger WhatsApp Telegram Print
Share
Facebook Twitter LinkedIn Pinterest VKontakte Messenger Messenger WhatsApp Telegram Share via Email Print