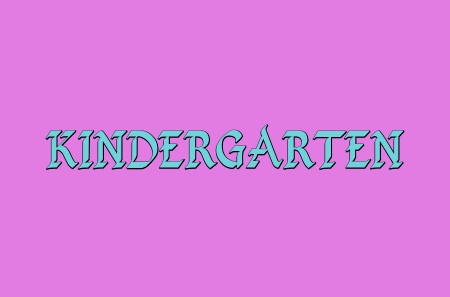 KINDERGARTEN (in Australia and NZ often shortened to KINDER or KINDY) is where 5-year-old children are introduced to school and learn all about their ABC’s and choice time.
“In the US, almost all children attend at least one year of kindergarten and many attend for two years.”
The term is used around the world to describe a variety of different educational institutions that have been developed for children ranging from the ages of 2 to 7, depending on the country concerned.
“The equivalent in England and Wales is reception.”
It comes from the German ‘Kinder’ (children) and ‘Garten’ (garden). Although it’s pronounced either ‘kindergarten’, or ‘kindergarden’ in AmE, the spelling ‘kindergarden’ is considered to be incorrect by many sources.
“There is no such word as ‘kindergarden’. Such spelling makes me cringe.”
A garden of children is a lovely image for a classroom full of antsy kids trying their hardest to master basic skills through creative and lessons. That’s just how they were seen by the 19th-century German educator Friedrich Fröbel, who’s credited with inventing this method of developing intelligence in young children.
“In Britain, we recognise “kindergarten” but it sounds American.”
The term is not in common use in the UK. Pre-schools are usually known as creche, nursery schools or playgroups. A crèche [krɛʃ, kreɪʃ] or childcare is an institution where working parents drop off their children to be taken care of.
“I would call it a nursery, play-school or childminder.”
In the US a nursery (more often called a pre-kindergarten or pre-K) provides a school-like environment for children too young for kindergarten (typically, three-year-olds), while ‘child care’ is a broad term that describes services provided for children outside of a strictly educational setting.
“When I hear ‘childcare’ I think of very young children, like babies.”
The Australian equivalent of this is the preparatory grade (commonly called ‘grade prep’ or ‘prep’), which is the year before the first grade. Regionally, for example, in the New South Wales, it is called kindergarten.
“At least in Victoria, ‘kindergarten’ (distinct from ‘grade prep’) is a form of, and used interchangeably with, ‘pre-school’.”
What Americans call kindergarten is called ‘primary one’ in Scotland, and ‘year one’ in England and Wales – it’s the first year of primary education which starts at around age 5.
Related Articles
July 28, 2019
0 1,026 1 minute read
Share
Facebook Twitter LinkedIn Pinterest Reddit VKontakte Messenger Messenger WhatsApp Telegram Print
Share
Facebook Twitter LinkedIn Pinterest VKontakte Messenger Messenger WhatsApp Telegram Share via Email Print

What is the difference between a TV series and a serial?