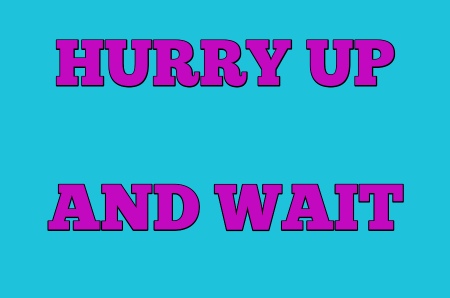 HURRY UP AND WAIT means take some action quickly, only to be halted at the next step in the process. Have you ever been asked to drop everything to complete an urgent task and then found that it wasn’t so urgent after all?
“We followed the ‘hurry up and wait’ philosophy, arriving several hours prior to our flight.”
The phrase holds quite a bit of accuracy for some circumstances. Rushing to get to the airport two hours before the flight departs only to be delayed two hours on the tarmac waiting for clearance from the tower.
“When we went to the airport for our vacation, we followed the hurry up and wait philosophy, arriving several hours prior to our flight.”
It also applies to anything that requires you to be on time but does not start for a good while. Being in a rush to make it to the airport in time to pick someone up, only to learn it’s delayed 2 hours.
“I did 80 just to get to the doctor’s office on time, and he did not even show up for another hour. It was another case of hurry up and wait.”
The phrase may have originated in the US military in the 1940s to depict the day-to-day grind of soldiers where you have to hurry up to point B only to have to wait hours for the event to occur.
“After 8 hours of hard labor the soldiers finally finished digging the bunker, only to have to wait around for another two hours for supplies to come in.”
Many US military veterans, in particular, consider this phrase to be synonymous with military culture.
“My father says that all he did in the army was hurry up and wait.”
Due to its oxymoronic peculiarity the phrase is commonly used in pop-culture as a name for numerous songs, books and movies.
July 28, 2019
0 1,039 1 minute read
Share
Facebook Twitter LinkedIn Pinterest Reddit VKontakte Messenger Messenger WhatsApp Telegram Print
Share
Facebook Twitter LinkedIn Pinterest VKontakte Messenger Messenger WhatsApp Telegram Share via Email Print