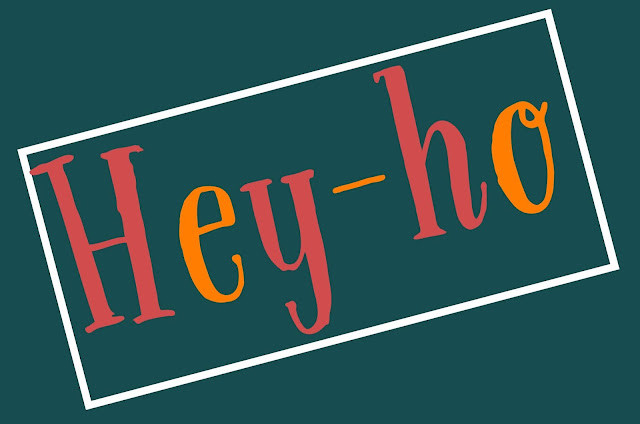 HEY HO or HEY-HO is a light-hearted dismissal or acceptance of a troublesome situation.
“Oh, we’ve just missed the bus. Hey-ho.”
It’s the verbal equivalent of a shrug. You say ‘hey-ho’ or ‘that’s the way it goes’, ‘c’est la vie’, ‘that’s life’ or whatever. It’s quite a British way to stoically say ‘mustn’t grumble’.
“I just say hey ho and carry on, hoping that some day things will be better.”
What can you do? It’s just what the situation is, we just have to accept it. The saying might also fall into the same category as ‘There you go’, ‘Some mothers do have ’em’, ‘I blame the parents’, ‘Can’t get the staff’, etc.
“Hey-ho, there’s nothing more to say then, let’s get on with it.”
The saying first appeared in print in 1471, according to the OED, which says it has nautical origins, meant to mark the rhythm of movement in heaving or hauling.
“I didn’t get the promotion again but hey ho.”
It was used when sailors were pulling a rope to mark when they should pull. A generalized marker of rhythm, over time, it has become a meaningless refrain in various chants and songs.
“But when I came unto my beds, with hey, ho, the wind and the rain” [Twelfth Night by William Shakespeare] *
Being a BrE expression, in NAm culture, it seems to show up only in some traditional chants and current songs used as a repetitive framework.
“Hey ho, let’s go.” [Blitzkrieg Bop by Ramones] **
Hey-ho blended meanings with ‘heigh-ho,’ which was first recorded in 1553 and is defined as an expression of yawning, sighing, languor, weariness or disappointment.
“I have to go through this rather embarrassing bet but hey-ho.”
It had fallen out of favor in the past few decades, but recently hey-ho references have begun to creep back into popular usage.
* seems to be just a metrical makeweight here
** also a chant used by the audience at a Ramones concert. Has become popular at sporting events too, where it’s sometimes shouted as a rallying cry
Related Articles
July 28, 2019
0 1,030 1 minute read
Share
Facebook Twitter LinkedIn Pinterest Reddit VKontakte Messenger Messenger WhatsApp Telegram Print
Share
Facebook Twitter LinkedIn Pinterest VKontakte Messenger Messenger WhatsApp Telegram Share via Email Print

THE PERFECT INFINITIVE with TO (to have + past participle)