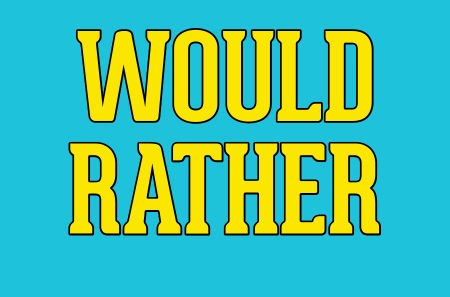 If you have a strong liking for something, you have a preference for it. You might have a preference for apples, but there are some days when you’re stuck eating a banana instead.
“I’d rather have a banana any day of the week now.”
WOULD RATHER is used to specify a preference for one thing over another. If you would rather do something you are more inclined or willing to do it. Wouldn’t you rather go to the movies than stay home and clean the house?
“Would you rather have a dog with a cat’s personality or a cat with a dog’s personality?”
However, with certain verbs – like; enjoy; appreciate, etc – the meaning changes a little bit.
“I’d rather like a beer.” (I’d quite like/enjoy having a beer now)
Say, you walk past a café and stop and say:
“I’d rather like a cup of coffee now!”
You aren’t making a choice among different kinds of drink, you just mean that it’d be great to have a cup of coffee now. Then you enter the café and see a wide selection of different caffeinated beverages, among them a great chocolate ice cream cocktail.
“On the other hand, I’d rather have that chocolate ice cream cocktail.”
Now, you’re expressing your preference to one drink among a whole range of the available items.
Would rather has two different constructions:
1. same subject + base form
“I’d rather stay at home than go out tonight.”
“I’d rather not go out tonight.”
When we want to refer to the past we use would rather + have + -ed form (perfect infinitive without to):
“I’d rather have spent the money on a holiday.” (the money wasn’t spent on a holiday.)
2. different subject + past simple clause
“I’d rather you stayed at home tonight.”
“I’d rather you didn’t go out tonight.”
In negative sentences with a different subject, the negative comes on the clause that follows, not on would rather:
“She’d rather you didn’t phone after 10 o’clock.”
“Would rather” is stronger – and therefore less formal than “would prefer.”
“I’d rather not handle the problem myself.”
To many users, “I’d rather not do that” also seems to carry a more heavy reluctance than “I’d prefer not to do that” and to be a bit more casual as well.
A: “Do you mind if I smoke?” B: “I’d rather you didn’t.”
When the subjects of the two clauses are different, we often use the past simple to talk about the present or future, and the past perfect to talk about the past.
“Would you rather I wasn’t honest with you?”
“I’d rather you hadn’t rung me at work.”
The past perfect structure is often used to express regret about something that has already happened.
“I’d rather you hadn’t done that.” (I wish you hadn’t done that)
We can use much with would rather to make the preference stronger.
“Kids would much rather play than study.”
In speaking, we stress “much”.
“She’d much rather they didn’t know about what had happened.”
If someone asks you a personal question you can say “I’d rather not say” to show your reluctance to answer it.
A: “So, Andy, how much do you make here? B: “I’d rather not say.”
We often use I’d rather not as a short response to say no to a suggestion or request.
A: “Do you want to go for a coffee?” B: “I’d rather not, if you don’t mind.”
Related Articles
July 28, 2019
0 1,033 2 minutes read
Share
Facebook Twitter LinkedIn Pinterest Reddit VKontakte Messenger Messenger WhatsApp Telegram Print
Share
Facebook Twitter LinkedIn Pinterest VKontakte Messenger Messenger WhatsApp Telegram Share via Email Print