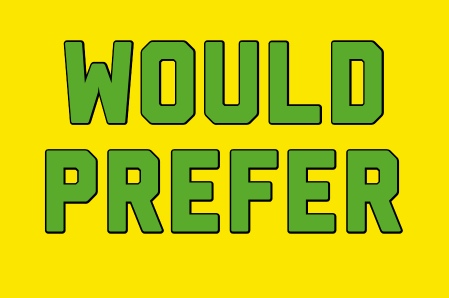 If you have a preference for something, you would like to have or do that thing rather than something else. Beware of the trap of not expressing any preferences at all though.
“I have no particular preference, so long as it is hot and sunny.”
WOULD PREFER is normally used to express a specific preference politely. It sounds a bit formal but is still common enough in everyday speech.
A: “Would you like some tea?” B: “I’d prefer coffee.”
It is very common to use “would prefer” instead of just “prefer” when we don’t want to sound too forceful or as if we are pressing our opinion and desires on other people.
A: “Shall we take a cab or walk home?” B: “I’d prefer to walk.”(only if that’s okay)
If someone offers you hamburgers and not hot dogs, it’s more polite to say, “I’d prefer a hot dog” than “Bleagh, hamburgers. Gag me!”. It’s similar to the way we use “would like” instead of “want” to sound less direct.
“Hmm, I guess Thursday is a bit too busy, I’d prefer Friday.”
Although “would prefer” most commonly expresses specific preferences, sometimes it could be interpreted generally when it refers to a hypothetical situation in which you would have to make a choice.
“(If I had to live in California) I’d prefer to live in LA than in San Diego.”
When we want to say that we would like one thing more than another, we can sometimes introduce the second thing with to/over/instead of + noun or -ing form, esp. if we use “would” in a conditional statement.
“I’d prefer walking to/over/instead of driving if my legs were in better shape.”
However, if you just talk about your preference in a certain situation, would prefer is normally followed by rather than + infinitive or perfect infinitive when referring to the past.
“I’d prefer to watch TV rather than (to) do shopping.”
“I’d prefer to have been born somewhere else.”
Using “than” without “rather”, informally, is accepted by some usage guides but rejected by many others so use it at your own risk.
“Than must not be used without rather after prefer.” [A.S. Hornby in A Guide to Patterns and Usage in English, 1966]
To express a preference on someone else’s actions we use would prefer + object + to infinitive + rather than (to) infinitive or would prefer + object + to perfect infinitive rather than (to) perfect infinitive when referring to the past.
“I’d prefer my son to live with me rather than (to) live abroad.”
“I’d prefer your daughter to have accepted my apology rather than (to) have ignored me last night.”
I WOULD PREFER IT IF is used to say that you wish a situation was different.
“Sales have gone down, and obviously we’d prefer it if that didn’t happen.”
It can be used when telling someone politely not to do something.
“I’d prefer it if you didn’t go out.” (I’d rather you didn’t go out)
“I’d prefer it if you wouldn’t insult my friends.”
Related Articles
July 28, 2019
0 1,031 2 minutes read
Share
Facebook Twitter LinkedIn Pinterest Reddit VKontakte Messenger Messenger WhatsApp Telegram Print
Share
Facebook Twitter LinkedIn Pinterest VKontakte Messenger Messenger WhatsApp Telegram Share via Email Print

HURRY UP AND WAIT