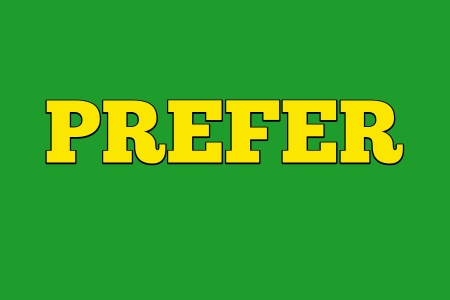 Whether it be chocolate ice cream over other flavors, or getting going first thing in the morning as opposed to lounging in your PJs, it’s called your preference. And if you like them all the same, you have no preference.
“We can meet today or tomorrow; I don’t really have any preference.”
PREFER means to like better and indicates a comparison between certain choices we’re pointing out. It sounds a bit formal but is still common enough in everyday speech.
“I happen to prefer spicier foods. (I normally favor spicier foods)
It is used to talk generally about tastes and likes. If your parents prefer your sister to you, chances are her allowance will be higher and you’ll get blamed for things she’s done.
“I prefer tea to/over coffee.” (I like tea and not coffee)
We can use a to-infinitive or an -ing form after prefer: prefer doing A to (doing) B. BUT: prefer to do A rather than (to do/do) B.
“She prefers drinking tea to coffee/She prefers to drink tea rather than coffee.”
If the sentence contains two choices, the rejected alternative is followed by:
1. “to” or “over” followed by a noun or -ing form.
“I prefer playing football to/over playing tennis.”
The use of “over” is a relatively recent phenomenon which started gaining a bit of ground in AmE in the 1940s and was non-existent in BrE until around 1980. Many native speakers consider it unnatural, so use it only at your own risk.
“Sounds alien to me as a BrE speaker, I assume it must be an AmE convention.”
It’s worth mentioning, however, that “over” has become quite popular in the passive voice.
“The more stringent policy is preferred to/over the somewhat less stringent policy.”
In general, “to” is about twice as common as “over”, so the former is the safer choice, but using “A is preferred over B” is more acceptable.
2. “instead of” followed by a noun or a phrase introduced by an -ing form. It implies substitution; suggests that one thing replaces another. More common in AmE and, overall, much less common than “to”.
“My dog prefers sleeping indoors instead of using the cage at the back of the house.”
3. the expression “rather than”, which is followed by the infinitive with or without to. It sounds slightly more formal to some users.
“I prefer to walk rather than (to) catch the train.”
Using “than” without “rather”, informally, is gaining some ground. Although it’s mentioned in some usage guides (for example, Collins Dictionary, as a less common usage), individual tolerance of this form varies, and is in flux.
“I prefer to walk than to catch the train.”
Though it might be acceptable in very informal contexts, it should be definitely avoided in formal speech.
4. the expressions “as opposed to”, “compared with/to”, “in contrast to” or “versus”. All these phrases seem to do is use more words without adding any meaning.
“I preferred coming to England as opposed to going to Perpignan.”
“Marketers use the data to see what rich customers prefer versus poorer ones.”
Related Articles
July 28, 2019
0 1,052 2 minutes read
Share
Facebook Twitter LinkedIn Pinterest Reddit VKontakte Messenger Messenger WhatsApp Telegram Print
Share
Facebook Twitter LinkedIn Pinterest VKontakte Messenger Messenger WhatsApp Telegram Share via Email Print

HURRY UP AND WAIT