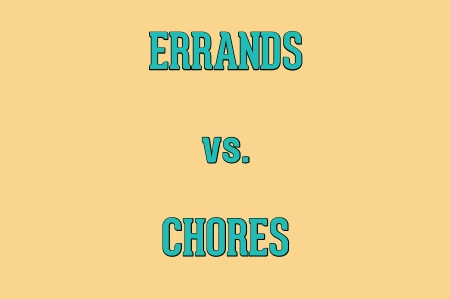 DOING CHORES means performing regular in-household tasks around the house or farm, which are often unpleasant but necessary. Washing the dishes is a chore, and so is completing a homework assignment you aren’t excited about.
“I did all the chores I was supposed to do at the home.”
Sometimes a thing that you wanted to do can become a chore if it ceases to be fun or interesting. It can be used in the sense of something really tiresome, mundane and repetitive; a time-consuming task; a drag.
“Cooking is not a chore. It’s something I really enjoy doing.”
RUNNING ERRANDS means going places away from home to complete a task e.g. going to the store/library/post office, etc.; getting a key copied, stopping at the bank to deposit checks or pick up prescriptions/dry cleaning/tickets, etc.
“She began running errands and doing chores for friends and neighbors, taking care of things they didn’t have time to do themselves.”
Garbage removal and floor sweeping are chores while grocery shopping and car washing are errands. If you work 40+ hours during the week, the only time left to run errands, clean house and do other chores is often the weekend.
“I need someone to run errands for me and help with daily chores.”
Whilst it might be argued that running errands can be a bit of a chore, one could hardly claim that chores implied errands, except very distantly.
“Running errands will seem like less of a chore if you mix in something you enjoy.”
In fact, nothing within your own property is an errand – as far as the letterbox at the head of your front drive or the shed in the back garden. But once you get out into the street to drop a note into next door’s letterbox, it’s an errand.
“After running all the errands I’ll have to go back home to handle some chores.”
Something like laundry can be either an errand or a chore though. If you have an in- house laundry machine, it’s a chore, but if you go to a laundromat, you are running an errand.
“I’d like to stay at home and relax but I’ve got some errands to take care of.”
In the end, the use of these varies from person to person, and many people use them interchangeably, though they usually have distinct meanings.
“Once I finish raking the leaves, my weekly chores will be complete.”
According to some commentators, in the UK these terms have a faintly dated ring to them and seem to be much more commonly employed in the US.
“BrE doesn’t use the word “chores” very much. It sounds very American to me.”
In BrE, ‘chore’ has a stronger meaning of being a real nuisance; rather difficult task. In AmE, chores have a compulsory overtone to them; things you wouldn’t do if you didn’t have to.
“‘Chore’ is fine in the UK, though, to me, it suggests something time-consuming.”
Related Articles
July 28, 2019
0 1,035 2 minutes read
Share
Facebook Twitter LinkedIn Pinterest Reddit VKontakte Messenger Messenger WhatsApp Telegram Print
Share
Facebook Twitter LinkedIn Pinterest VKontakte Messenger Messenger WhatsApp Telegram Share via Email Print