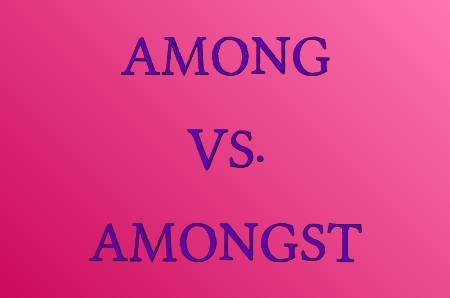 AMONG and AMONGST are both prepositions meaning in the midst of, surrounded by, in the company of, or in association with.
“The key was hidden among the papers covering the desk.”
“A British woman was amongst the 54 survivors of the disaster.”
They can be used interchangeably to indicate a division, choice, or differentiation involving three or more participants.
“The king divided the country amongst his sons.”
“I saw a few familiar faces among the crowd.”
While ‘amongst’ is fairly common—though still rare compared to ‘among’—in British, Australian, and Canadian English, it is rare in AmE and may have an archaic, overly formal or even pretentious ring.
“When you’re among friends, you talk amongst yourselves.”
That said, although ‘amongst’ can seem old-fashioned, it’s still grammatically correct as an alternative to ‘among’. The choice between the terms is largely a matter of stylistic preference.
“Petronas Towers in Malaysya are among/amongst the tallest buildings in the world.”
If you’re in the UK or Canada, ‘amongst’ is unlikely to stand out as especially unusual; if you’re in the US, it’s almost certainly going to seem oddly old-fashioned unless you’re using it in an appropriate context.
“Microsoft is among the top corporations in the world.”
If you’re writing a medieval fantasy story, or a piece of historical fiction, ‘amongst’ could fit well with your tone.
“Is it truly safe to walk amongst those peasants, my lord?”
But if you’re writing a news or feature article, or a piece of modern fiction, ‘among’ is probably a better fit.
“Australia’s cheap, dirty petrol ranks among the worst of the OECD nations.”
While some older grammar guides insist that ‘amongst’ is the appropriate choice before a vowel, this view, although still favored by some, is not supported by current usage trends.
“Amongst/among other things, we will finish the house.”
Related Articles
July 28, 2019
0 1,027 1 minute read
Share
Facebook Twitter LinkedIn Pinterest Reddit VKontakte Messenger Messenger WhatsApp Telegram Print
Share
Facebook Twitter LinkedIn Pinterest VKontakte Messenger Messenger WhatsApp Telegram Share via Email Print

EIGHTY-SIX or 86 is a common AmE expression

📞 CALL vs CALL TO