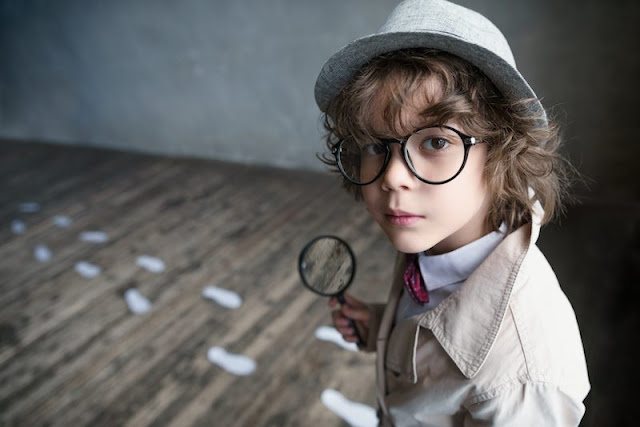 Sherlock Holmes is one of the most famous and well-loved detectives in the history of literature. The character was created by Sir Arthur Conan Doyle in the late 19th century. Since then he has appeared in four novels, over fifty short stories by the author, as well as countless TV series, films and video games.
To celebrate Sherlock Holmes Day on May 22nd, we’ve got five easy ideas to turn your students into reading detectives.
11. Contextualizing
19th century London is a very different place to the world your students live in today! This means there may be references to unfamiliar ideas and objects and things your students don’t understand. To help their comprehension, work with your students to identify words and concepts which might be difficult. For example, Sherlock Holmes and his colleague Doctor Watson often travel around in a horse-drawn carriage. Have students think about the modern-day equivalent (a bus, car or taxi) and think about what life was like in those days.
Asking questions about how life was different then and the advantages and disadvantages of the two lifestyles gets students using their critical thinking skills, as well as giving them a deeper understanding of the story.
22. Finding clues in the context
Often, our students will see new vocabulary in a text. During class and at home, they have tools at their fingertips to help them understand what a new word means. For example, they can ask the teacher, or look up a word in the dictionary. However, there may be times, such as during exams, when they can’t use these tools. Train students to guess what a word means from its context. They can look for clues like the position in the sentence, as if it comes before a noun, it’s likely to be an adjective; or grammatical clues like an
-ed
or
-ing
ending which may suggest it’s a verb.
33. Working with language
As gentlemen in 19th century Great Britain, Holmes and Watson sometimes use phrases which can sound very strange in today’s modern English. Take this excerpt from the original
Scandal in Bohemia
:
“Pray take a seat,” said Holmes. “This is my friend and colleague, Dr. Watson, who is occasionally good enough to help me in my cases. Whom have I the honour to address?”
Rewriting short sections of the text with more contemporary language and structures helps students to show they’ve understood and allows them to practise the skill of paraphrasing, which is an important reading-into-writing skill.
44. Using graphic organizers
If you’ve ever watched a police thriller on TV, you’ll see a whiteboard in the office with details about the case, the main suspects, a timeline and other details. Encourage your students to create a similar graphic organizer when reading.
With fiction, they can identify who the characters are, how they are related to each other and their role in the story. With non-fiction, students can identify the key information from a text, such as important dates, facts and figures. As well as showing their understanding of the text, it acts as a summary of the key points.
55. Predicting
Sherlock Holmes is famous for his skills as a detective and he always catches the criminals in the end. Your students can use prediction skills to guess the outcome of the story too – this will show how well they’ve understood the text so far, as they will be making deductions based on what they’ve uncovered while reading.
Challenge them to beat Sherlock Holmes by having them predict the ending after each chapter of the story – if their original prediction matches the story’s ending, they’re a top-notch detective!
SSherlock Holmes Readers
We’ve got a great selection of Sherlock Holmes Readers, both for younger learners and adults.
In our Pearson English Kids Readers collection, you can find two short stories in which Holmes and Watson investigate different crimes. In The Red-Headed League, a young man takes on a strange job copying a text from a book. How does this relate to a planned bank robbery? And will Holmes solve the case in time?
And copying comes up again in The Three Students – but this time there is concern that an important exam paper has been copied. Who is to blame? Will your students catch the culprit before Holmes and Watson?
Pick up your copy today and download Teacher Resources for this Level 4 Reader here.
For Teens and Adults, check out our range of Sherlock Holmes short story collections below, as well as the novel The Hound of the Baskervilles. All come with audio and Teacher Resources which can be downloaded from our site. Click on each title for more information.
Level 2
Three Short Stories of Sherlock Holmes
Level 3
A Scandal in Bohemia
Sherlock Holmes and the Mystery of Boscombe Pool
The Return of Sherlock Holmes
Level 4
Three Adventures of Sherlock Holmes
Level 5
Sherlock Holmes Short Stories
The Hound of the Baskervilles
What’s your favorite detective story? Let us know in the comments!
Related Articles
July 27, 2019
0 1,022 3 minutes read
Share
Facebook Twitter LinkedIn Pinterest Reddit VKontakte Messenger Messenger WhatsApp Telegram Print
Share
Facebook Twitter LinkedIn Pinterest VKontakte Messenger Messenger WhatsApp Telegram Share via Email Print

The Benefits of Teaching Ethical Dilemmas