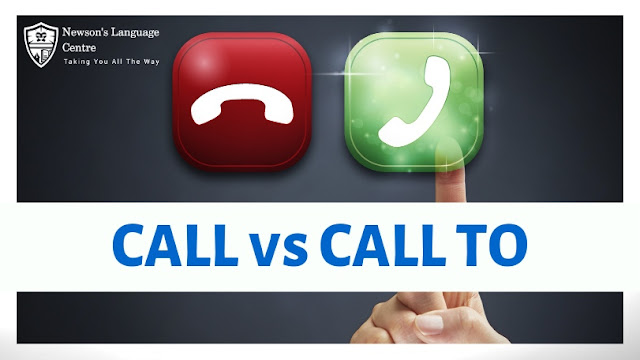 ⛔ I called to my friend yesterday on the phone. (wrong)
⛔ I called to the police (wrong)
Those are common mistakes. We almost never use TO with call.
✅ I called my friend yesterday…
✅ I called the police.
Even on an online dictionary, you will struggle to find “call to.” It is used in fixed expressions:
● A call to arms – a strong command or inducement for action, especially among a particular group of people.
– The actress used the event as a call to arms for women in the film industry to demand equal pay.
● A call to prayer – a signal conveyed to members of the religion indicating that it is time to engage in a scheduled prayer ritual.
● Call to someone – here it means: to beckon. (to do certain actions in an attempt to draw attention to oneself)
So if I call to my friend, I am waving my arm at him saying “come here.” I can’t use “call to” in the traditional sense that I phone someone.
Related Articles
July 20, 2019
0 30 1 minute read
Share
Facebook Twitter LinkedIn Pinterest Reddit VKontakte Messenger Messenger WhatsApp Telegram Print
Share
Facebook Twitter LinkedIn Pinterest VKontakte Messenger Messenger WhatsApp Telegram Share via Email Print

Words that are used to fill in time when speaking