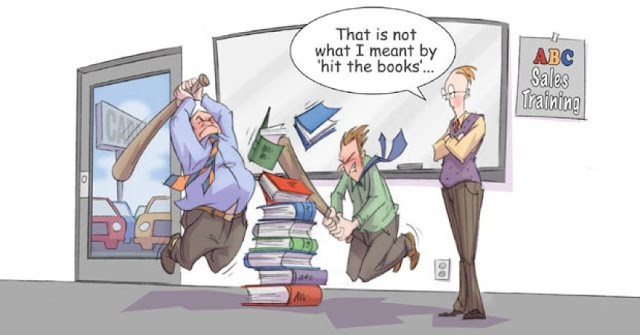 1. FREAK OUT: to become very angry, scared or excited
Mum, don’t freak out! I married a guy in Las Vegas.
2. BE A CATCH: be someone worth marrying/having
John is taking me out tonight. He’s such a catch, I hope he’ll propose.
3. PIECE OF CAKE: when something is extremely easy to do
Do you think you could beat him in a race?
Yeah, piece of cake. I’m definitely a lot faster than him.
4. HIT THE NAIL ON THE HEAD: used if something someone says, is precisely correct
My doctor hit the nail on the head. He knew exactly what was wrong with me!
5. COSTS AN ARM AND A LEG: when something is very expensive
My son wants that mountain bike for his birthday, but it’ll cost an arm and a leg!
6. HIT THE BOOKS: to study very hard
Do you want to go for lunch somewhere nice?
No thanks, I’m going to hit the books. I have an exam coming up soon.
7. BITE OFF MORE THAN YOU CAN CHEW: to take on something that is too much for you to handle
He recently got promoted and took on some new responsibilities, but he’s just too busy. He bit off more than he could chew, and I don’t think he can handle it anymore.
8. WHEN PIGS FLY: this means that something will never happen
Aren’t you going to buy that dream house you told me about?
Ugh, I will when pigs fly. It’s just so expensive, I don’t think it’ll happen.
9. DON’T JUDGE A BOOK BY ITS COVER: this means don’t make a decision based on a brief impression or outward appearance
I don’t like our new neighbours very much, they’re quite strange.
Hey, you shouldn’t judge a book by its cover. Give them a chance, I think they’re just a bit quirky but really nice!
10. YOU ROCK: you are great
Thanks for the tickets, Rob. You rock!
Related Articles
July 12, 2019
0 1,028 1 minute read
Share
Facebook Twitter LinkedIn Pinterest Reddit VKontakte Messenger Messenger WhatsApp Telegram Print
Share
Facebook Twitter LinkedIn Pinterest VKontakte Messenger Messenger WhatsApp Telegram Share via Email Print

'Idioms with nationalities and countries'