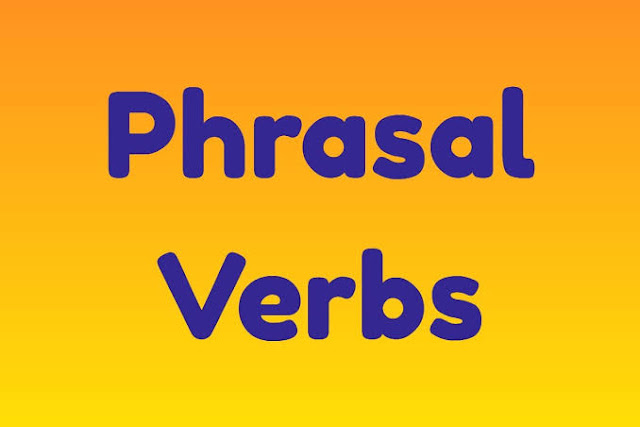 ⭐A phrasal verb consists of a verb and a preposition, a verb and an adverb, or a verb, an adverb, and a preposition — the verb’s partners are collectively known as particles — that combine to produce a figure of speech. (Phrasal verbs are common in idiomatic expressions, such as “add insult to injury” or “scared them out of their wits.”) Examples include “call back,” “check up,” and “give in.”
Note that phrasal verbs can be converted to adverbs or nouns, and when they are, they are either hyphenated or closed up:
“Call back in a few minutes,” but “Dial the callback number.”
“She’s going to check up on it,” but “I’m going for a checkup.”
Not every phrasal verb has a converted form: “Give in” never appears as give-in, though it’s plausible: “He has a give-in attitude” and “I’ve been guilty of a give-in now and then” make grammatical sense, but those idioms have not been adopted into English. (If the noun form were part of the language, although such forms are generally closed up, give-in would be an exception because the first element of the phrase ends with a vowel.)
Phrasal verbs are easily split by pronouns, nouns, and noun phrases, as in “I’m making it up,” “Put your toys away,” and “I poured the soup mix in.” Note that a phrasal verb can be split or kept together when used with a noun (“Put down your pencils” or “Put your pencils down”) but no such choice is possible with a pronoun: You can write, “Put them down,” but “Put down them” isn’t considered grammatically correct.
Often, though both options may be correct, a phrasal verb may read better with an intervening word or phrase than left intact, and may even more clearly indicate the correct meaning in the former format: The headline “Mom Scares Off Attacker” seems awkward somehow, but move the particle to the end, and it flows more smoothly: “Mom Scares Attacker Off.” Likewise, “He passed around a fruit-and-cheese hors d’oeuvre plate” suggests that the subject veered to avoid the plate, whereas “He passed a fruit-and-cheese hors d’oeuvre plate around” clearly conveys that he participated in the movement of the plate.
Also, not every phrasal verb lends itself to splitting: “Gave off,” as in “It gave off a foul odor,” could conceivably be split (“It gave a foul odor off”), but such syntax looks awkward. In other cases, the elements never appear together, as in “I can’t tell them apart,” in which tell and apart must be separated by, not followed by, them.
When an additional adverb is included with a phrasal verb, whether the adverb can be inserted within it depends on whether a pronoun or noun has already been inserted. All these variations are correct, including the third one, in which picked and at are separated by gingerly:
“Gingerly, she picked at the food.”
“She gingerly picked at the food.”
“She picked gingerly at the food.”
“She picked at the food gingerly.”
(Only “She picked at gingerly the food” and “She picked at the gingerly food” are ungrammatical.)
But in the variations of the following sentence, because a pronoun, not a noun, is involved, the third option is invalid:
“Carefully, he looked it over.”
“He carefully looked it over.”
“He looked carefully it over.”
“He looked it over carefully.”
Because of the rich variety of forms possible for phrasal verbs, you are advised, when in doubt, to consult a dictionary’s usage note for the root verb of the phrasal verb, or another usage resource.
Related Articles
July 12, 2019
0 38 2 minutes read
Share
Facebook Twitter LinkedIn Pinterest Reddit VKontakte Messenger Messenger WhatsApp Telegram Print
Share
Facebook Twitter LinkedIn Pinterest VKontakte Messenger Messenger WhatsApp Telegram Share via Email Print

What is a Phrasal Verb?

10 Phrasal Verbs with ON and OFF

VOCABULARY: 17 Phrasal verbs with ON 🎓