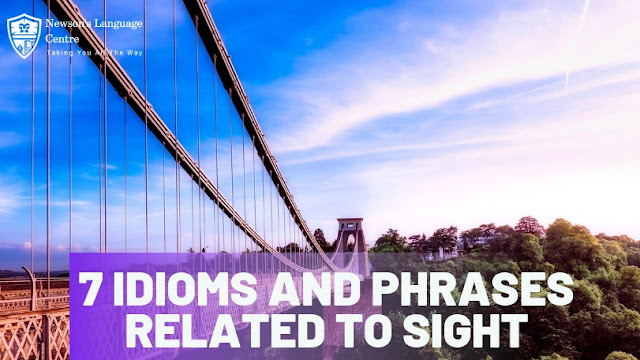 Phrases related to SIGHT
✔ Out of sight, out of mind
a. said to emphasize that when something or someone cannot be seen, it is easy to forget it, him, or her.
b. when you can’t see something and therefore, don’t think about it.
– The little boy was out of sight and out of mind until his mother discovered that he had emptied all of the shampoo containers into the toilet.
✔ At first sight
If you say that something seems to have certain characteristics at first sight, you mean that it appears to have the features you describe when you first see it but later it is found to be different.
– It promised to be a more difficult undertaking than might appear at first sight.
– At first sight, it resembles a traditional village of two-storeyed houses.
✔ Out of sight
a. slang – not visible
b. extreme or very unusual
c. (as interj.) That’s marvellous!
– The summit peak towers over the ocean, but the great cliff itself is out of sight beneath one’s feet.
✔ Catch sight of (something)
a. to make out by means of the eyes; discern; see
b. to see briefly; glimpse
– I could only catch sight of it here or there, losing it among the crowds or in the aisles.
✔ Lose sight of (something, somebody)
a. to fail to keep in sight; see no longer
b. to fail to keep in mind; forget
– She closed the gap between them so as not to lose sight of him once they reached the station.
✔ Know (somebody) by sight
To recognize someone or something based on its or their appearance, but without knowing its or their name or any other information.
– Even after working there for a year, there were still some co-workers whom I only knew by sight.
✔ See the sights
To see the important things in a place; to see what tourists usually see.
– We plan to visit Paris and see the sights.
Related Articles
July 11, 2019
0 1,021 1 minute read
Share
Facebook Twitter LinkedIn Pinterest Reddit VKontakte Messenger Messenger WhatsApp Telegram Print
Share
Facebook Twitter LinkedIn Pinterest VKontakte Messenger Messenger WhatsApp Telegram Share via Email Print