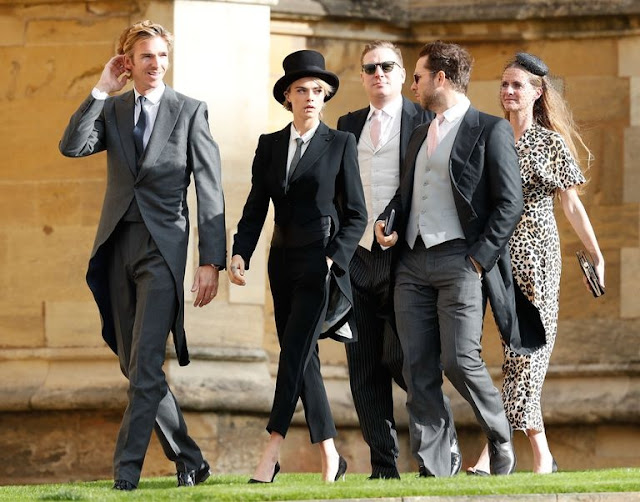 📰 NEWS – Interesting Articles + Vocabulary Bank – TIME.
Cara Delevingne Hit Royal Wedding in A Top Hat and Tuxedo
It may be Princess Eugenie’s big day, but Cara Delevingne nearly stole the show.
Delevingne rocked up to Princess Eugenie’s wedding to Jack Brooksbank wearing an outfit sure to go down in the record books for the most memorable royal wedding fashion. She showed up at St. George’s Chapel at Windsor Castle (if that sounds familiar, it’s because it is where Meghan Markle and Prince Harry were wed earlier this year) wearing a sleek, form-fitting tuxedo paired with a stylish top hat, sky-high black suede heels, and, oddly, a toothpick daintily perched on her lip. As author Caitlin Moran wrote on Twitter, the cropped morning coat, cummerbund, crisp white blouse, tailored trousers, and shrunken tie made the model and actress look like a “sexy Artful Dodger.”
It’s unclear if any other woman has made a similar sartorial choice in the past and dared to wear a suit to a royal wedding, but based on the reaction to Delevingne’s ensemble, expect to see a lot more women in tuxedos when summer wedding season hits.
VOCABULARY BANK:
● Rock up (informal 🇬🇧) – arrive; turn up. (sometimes without an invitation)
● Go down in the record books/go into the record books (informal 🇬🇧) – to achieve one of the best results that have ever been achieved in a particular sport or activity.
● Show up (informal 🇬🇧) – to appear or arrive
● Sleek (adjective) – to look rich and stylish
● Form-fitting (adjective) – clothes fit very closely to the body of the person who is wearing them. Form-fitting is usually used to describe clothes worn by women.
● Tuxedo (mainly 🇺🇸) – is a black or white jacket worn by men for formal social events. In the UK – dinner jacket.
● Sky-high (black suede heels) – emphasizing that they are at a very high level.
● Oddly (adverb) – used to indicate that what you are saying is true, but that it is not what you expected.
● Toothpick – a very small, pointed stick for getting bits of food free from between the teeth.
● Daintily (adverb) – delicately or elegantly
● Perched on (her lip) 🇬🇧 – sitting down or placed on the edge or tip of something
● Cropped (morning coat) – cropped items of clothing are shorter than normal.
● Cummerbund – is a wide piece of cloth worn round the waist as part of a man’s evening dress (dinner jacket).
● Crisp white (blouse) – used as a modifier to point out how white the item is.
● Tailored (trousers) – made or designed for a particular person or purpose.
● Shrunken (tie) – reduced in size.
● Sartorial choice – relating to clothes and to the way they are made or worn.
● Ensemble – all the parts of something considered together and in relation to the whole.
July 9, 2019
0 34 2 minutes read
Share
Facebook Twitter LinkedIn Pinterest Reddit VKontakte Messenger Messenger WhatsApp Telegram Print
Share
Facebook Twitter LinkedIn Pinterest VKontakte Messenger Messenger WhatsApp Telegram Share via Email Print

BBC lesson plans: for teenagers and adults - A2 and above.

VOCABULARY: 10 Verbs That Are Contronyms