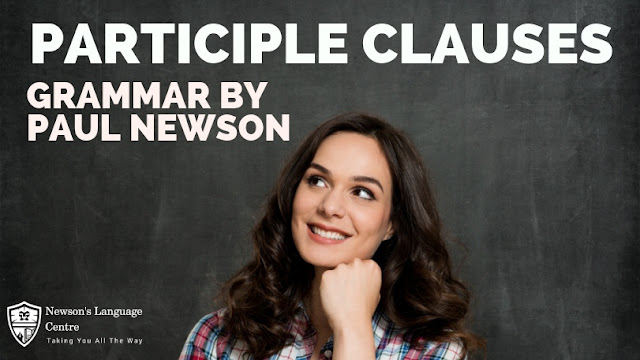 Let’s go over some basic points (not all but the most useful ones)
✅ Using participle clauses makes your English sound more professional and formal (The first word in this sentence is a participle, haa haa!!)
✅ We can take some words and combine them into a participle clause:
a) Can you see that babushka who is shouting over there?
a) Can you see that babushka shouting over there?
b) Most of the students who were asked to attend class didn’t.
b) Most of the students asked to attend class didn’t.
(The two examples above are also called a reduced relative clause)
✅ We can have participles after nouns and pronouns:
a) I can give you a job teaching kids. (a job which involves teaching)
b) I saw Paul sitting in the park getting attacked by chickens. (Paul who was sitting and who was getting attacked)
✅ Adverbial Clauses: These are veryyyyy formal expressing various things like condition, reason, time etc (but the context needs to be clear)
a) Treated well, this car will last you a lifetime
b) Having failed my driving test, I jumped off a bridge (As I had failed)
c.1) Putting down my gun, I surrendered (After I had put down)
c.2) Having put down my gun, I surrendered (After I had put down)
(C.2 is much more formal)
✅ After prepositions and conjunctions
a) After eating a chicken I always want to sleep
b) When speaking to English people, you always need to be super polite.
c) Clean your teeth before kissing someone
d) If asked to kill a chicken, would you do it?
e) Leave in the oven until cooked.
There is a lot more than I have written here. But it’s a good start. You probably won’t find any practice online so I made my own. Click on the document and change the rather informal style text into a formal one using participle clauses where necessary. There are several possibilities.
Enjoy!
July 5, 2019
0 1,028 1 minute read
Share
Facebook Twitter LinkedIn Pinterest Reddit VKontakte Messenger Messenger WhatsApp Telegram Print
Share
Facebook Twitter LinkedIn Pinterest VKontakte Messenger Messenger WhatsApp Telegram Share via Email Print